T-Mobile VS Verizon Wireless | Who is Better? 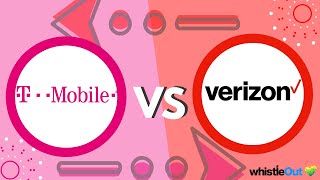 So you’re choosing between T-Mobile and Verizon? You’ve come to the right place! In this video i’m comparing coverage, plans, pricing, data speeds, and perks to help you decide between these major carriers. After each category, we’ll award either a carrier a star. The carrier with the most stars at the end wins!

🛑 🛑 🛑
Before we get to that, don’t forget to Subscribe! http://bit.ly/WhistleOutYouTube
We publish two videos each week, one is always on Friday the other is normally on Wednesday.

COVERAGE | Verizon Wins!
Looking at each carrier’s coverage map you can easily see Verizon has the most Nationwide coverage. T-Mobile’s coverage isn’t bad, but it’s just not as vast as Verizon. Because of that, Verizon gets the gold star here.
Next up, we’re comparing plans!

PLANS/OPTIONS | Verizon Wins!
Verizon has 13 regular plans that range from pre-paid, pay as you go and go all the way to unlimited talk, text, and data with all the bells and whistles and T-Mobile has 7. With that said we’re going to give this to Verizon because they have nearly double the number of options.

PRICING | T-Mobile Wins!
When it comes to pricing T-Mobile is easily the winner here.
Starting with prepaid plans T-Mobile offers three different options that are all cheaper than Verizon’s cheapest prepaid option which starts at $30.
And if you want unlimited everything, unlimited talk, text, and data, T-Mobile starts at $50/month whereas Verizon starts at $65/Month.
Because of that T-Mobile gets the gold star here.

DATA SPEEDS | T-Mobile Wins!
When it comes to Data Speeds we’re turning to Ookla who tests the data speeds of the four major carriers. They found that T-Mobile has generally faster data at 30.94 Mbps where Verizon on average has data speeds of 29.45. Although Verizon is just barely slower, we’re still going to give T-Mobile the gold star here.

Consistency | Verizon Honorary Winner!
A quick side note here, Even though T-Mobile has faster average data speeds, Verizon was found to have the most consistent internet speeds. So we’ll award Verizon an honorary gold star for that.

PERKS | Verizon Wins!
The battle continues with perks, who has the best ones?
With T-Mobile’s most expensive plan you get free inflight texting, a two-screen Netflix subscription if you have 2 or more lines and t-mobile Tuesdays which gives you free or discounted products weekly.
With Verizon, you get up to 500 GB of cloud storage, free Disney + for one year, free Apple Music, and Verizon Up which gives you free and discounted products just for being a Verizon customer
Verizon offers just a bit more in terms of perks so we’re giving them the gold star.

WHO SHOULD YOU CHOOSE?
My tally has Verizon as the better carrier by one star, but just because they came out on top here doesn’t mean they’re necessary for you.

For instance, if you look at T-Mobile’s plans you’ll see they are great for traveling. If you travel outside the US a lot, T-Mobile is definitely the carrier for you. Also if price is important T-Mobile is cheaper than Verizon.

Now you should choose Verizon if you want more coverage throughout the US and want consistent data speeds. Plus Verizon is good for those of you who are looking to score free Apple Music and Disney + accounts. Remember though Verizon is the most expensive carrier in the market.

👉🏽 WhistleOut.com is a cell phone plan and broadband plan comparison website. We do far more than that! We compare all the best plans, all in one place so you can get back to your busy life.

👉🏽Check us out for a quick glance or in-depth analysis of 56 wireless & internet companies.

👉🏽 Quick Link: here are the best of the best this month in Cell Phone Plans: http://bit.ly/2z6S75n
👉🏽Follow WhistleOut on Twitter: https://twitter.com/WhistleOut
👉🏽 Tell us what you think about our Best 💰 DEALS💰 page: https://www.whistleout.com/CellPhones